John Homer, a porter at Edward Street Hospital, has been honoured with a Good Citizenship Award following his courageous act of bravery in apprehending a male suspected of theft from a car.

The Award, given at a ceremony held at West Bromwich Police Station, was presented by Chief Supt. Steve Dugmore for ‘professional and swift action taken’ in the face of adversity. 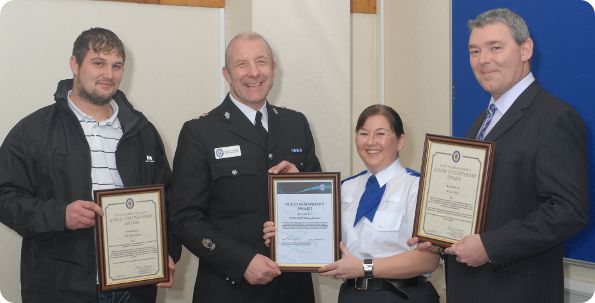 Mr Homer, without thought for his own safety, pursued and challenged a male he suspected of theft from a motor vehicle and, despite the man struggling violently, managed to detain him.   Another member of the public and a Community Police Officer from West Bromwich Police Station came to Mr. Homer’s assistance and the three of them were able to detain the aggressive offender until Police Officers arrived at the scene and made a formal arrest.

Mr Homer, whose brave actions resulted in a custodial sentence for the male in question said ‘I was really surprised to receive the award.  I noticed this man acting strangely around some parked cars, then in one movement he broke a car window, grabbed something from it and ran off.  I went in pursuit of him and was able to grab him.  Luckily there were other people willing to help me otherwise I think there could have been more of a battle with him’.