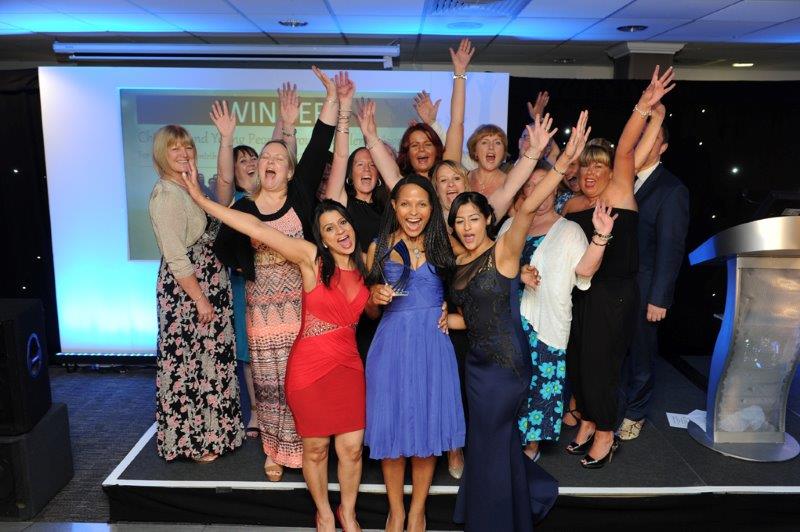 Over 150 staff from around the Trust gathered at the Hawthorn's Stadium, West Bromwich on Thursday 9th July to celebrate the successes and achievements of their friends and colleagues at this year's Achieving Excellence Awards.

The event, opened by Joanna Newton, chair of the Trust, saw staff and volunteers praised for their hard work and dedication in what has been another challenging year.

Ed James, host of Heart FM's morning radio show was master of ceremonies for the evening and truly was the host with most, presenting certificates and awards and generally ensuring everyone had a good time.

There were 11 categories of award up for grabs this year including: Making a Difference, for making an outstanding difference to others; Working Together, for partnership working, Supporting Excellence, for outstanding contribution in a non-clinical role / team and, new this year Apprentice of the Year, for clinical or business administration apprentices who have made a significant contribution to their team / work area.

This year's Working Together Award went to David Hipgrave, a staff nurse at the recovery and therapy unit in West Bromwich and John Homer, Chairman of West Bromwich Albion Supporters Club for their fantastic joint working on establishing one of the first dementia football memories groups in the UK.

David said: Fancy getting an award for doing something you love, football that is not the Albion, I'm a Wolves supporter! But seriously, I'm absolutely thrilled and delighted, and I know John will be too, to receive this award. We both love football and to see the joy on the faces of the participants of our group as we reminisce and encourage discussion about football and rekindle memories of games past, gives us a sense of achievement and pleasure. The smile on my face is going to stay with me for a long time."

The Apprentice of the Year Award presented this year for the first time, went to Alice Allen, Health Records Apprentice. Alice said, "It was great to get nominated for an award but to win is recognition for my hard work, I never expected it."

Karen Dowman, chief executive, said 'It always gives me great pleasure to host this event. Tonight is not only about recognising and celebrating achievements but it is also to show thanks and appreciation to all staff that show continued commitment to the Trust.

I also have to say a special thanks to our sponsors, Mills and Reeve, who are for the third year running sponsoring our Driving for Excellence Award and Absolute Interpreting and Translation Services Limited who are supporting the Trust again this year by sponsoring our Transforming Services Award."