Over 200 people turned out for the third membership event ‘Play Fair’ on 7th June at the Public in West Bromwich. 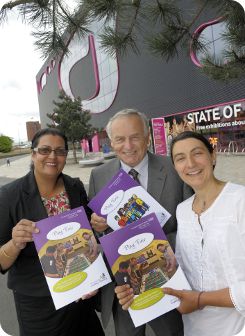 The event was opened by Chief Executive Karen Dowman, she announced the launch of ‘Play Fair’ the Trust’s Single Equality Scheme. Emma Louis, Head of Diversity and  Spirituality for the Trust, gave a short presentation on how the ‘Play Fair’ document sets out the Trust’s approach to promoting equality and celebrating diversity and how it is essentially about making things fairer for all. Parminder Dhani, who delivers the Trust’s Diversity Awareness Training, outlined how staff service users and the local community were all involved in shaping the Scheme.

There are so many people to thank for helping to make the event another success.  Jackie Smart, Non-Executive Director helped us facilitate the day and made sure everyone knew where the exhibition area was, how to find the workshops and where the musical entertainment and lunch was being held.  We had a fantastic turn out for the exhibition area with 33 different organisations taking part including; African Caribbean Centre, Bangladeshi Cultural Centre, Brushstrokes, shOUT, Volunteer Centre Sandwell and West Midlands Fire.

The workshops were attended by many, with positive feeback received about the service user sessions such as ‘Anthony’s Journey to Employment’ with Anthony Steen, ‘A Journey Through Depression’ with Rita Wakeman, Olive Nock and Margaret Sweeting and ‘Addiction to Recovery’ with Philip Whitehouse.  The Mental Health and Faith session, chaired by Martyn Jinks, went down a storm with some interesting questions being debated by the panel.  The Director of Care Governance, Sue Marshall gave feedback on the latest NHS Patient Survey, Changing Our Lives presented how someone who supports people with learning disabilities and mental health issues help speak up for themselves, and Karen Machin gave a talk on her own experiences and an update on the national campaign ‘Time to Change’.

The fun stuff was welcomed by all with the Smoothie Bike once again being one of the more popular activities. Delegates had fun learning how to juggle and spinning plates. The music entertainment was provided by a local singer songwriter Ben Drummon, which was thoroughly enjoyed by everyone, as well as chilled out tunes from saxophonist James Renford.

We would like to thank everyone who helped make the day so special!